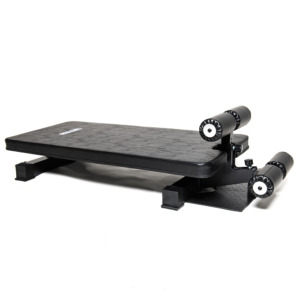 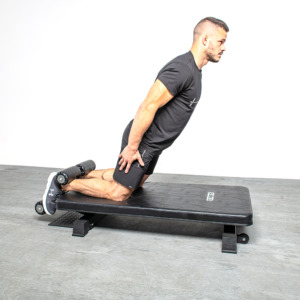 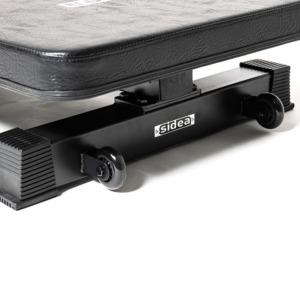 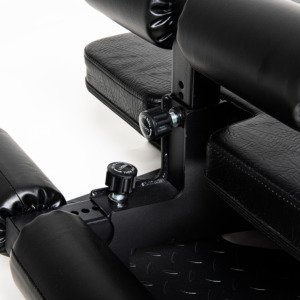 SKU: 9123 Categories: Functional Training, Ghd-bench sissy-squat, New Product & Trends, Products in code order, Strong fitness training, Training Kit Ski – FAST
Recent Posts
The 9123 bench includes two pieces of equipment: Glute Ham Developer (GHD) and Sissy Squat.
Like the 9013/1 Glute Hamstring AB Roller (GHR), the 9123 bench is a useful equipment for performing important complementary leg training exercises in the context of improving sports performance, i.e. athletic preparation or physical conditioning.
Used as a Hamstring Bench (Nordic Norwegian Curl), it is effective in training part of the posterior muscle chain (ischio-crural muscles, trunk muscles) mainly through eccentric (slowing down the load) and isometric (stopping the load) contraction exercises. In this way, the 9123 bench, combined with the essential exercise of the pulldown, makes it practical to train all types of muscle contraction (isometric, concentric, eccentric) and therefore all the components of strength production. As with GHR 9013/1, we would like to remind you that this type of training can be instrumental in preventing and limiting injuries to the anterior cruciate ligaments, which are often due to asymmetries between the posterior muscles (which are short and underperforming) and the anterior muscles of the thigh.
The use of the 9123 bench as a Sissy Squat Bench is similar, even though it is more specific; training only the quadriceps muscle in combination with the squat.  In this case, too, it is a complementary exercise, with the particularity, given the presence of “shin blocking” cushions, of being able to easily vary the workload through the bust inclination, more or less backward, or, in addition, through the use of weights (dumbbells, discs resting on the chest, or barbell positioned on the trapezius).
The use of weights reveals in some ways the role of a complementary exercise aimed at an analytical work, intense, at high repetitions, of “exhaustion” of the quadriceps, even if, for sports such as alpine skiing, the “unnatural” posture that is assumed on the Sissy Squat Bench reproduces the position of retreat to which the skier is often called during the load shifts on skis in certain cornering phases, where the overload is extremely high.  In the condition described below the patellar tendon and anterior cruciate ligaments are subjected to very high tensions and stresses, to the point of requiring a careful assessment of the danger-benefit ratio of the type of exercise and the relative overload.
A couple of clarifications: the Sissy Squat Bench is actually a Roman bench, or Roman chair, created for the Roman Chair Squat. The term Sissy Squat (a name derived from Sisyphus, a mythological character depicted with huge thighs) identifies, on the contrary, the famous, but different, exercise made famous by Vince Gironda.  The Roman chair has made a comeback with the name Sissy Squat Bench thanks to the spread of “old school” training.  Finally, the training of quadriceps is not the only use of the equipment, which is  effective for chain exercises dedicated to the core, too.
Join Waitlist We will inform you when the product will be available in stock. Please leave your valid email address below.